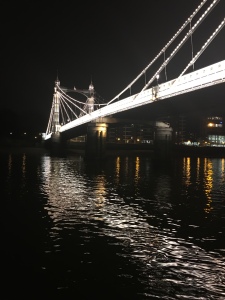 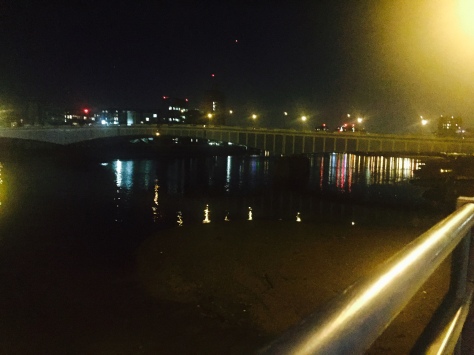 This very early evening your lighting-man (as opposed to your lighterman or your waterman) was to be found on the 16:28 Thames Clipper cruising from Embankment to Plantation Wharf, Battersea.

And thus he had the opportunity to observe the illumination status of the various road/rail bridges under which he passed … most of which have the joy to find themselves anchored in our dear Borough of Wandsworth.

1. Known as the Grosvenor Bridge … it’s a railway bridge-only going from Battersea Park Station to Victoria … no side/surface lighting at all … apart from the statutory boat-facing yellow ones. One blink and you’ve missed it.

2. The jolly busy road bridge that is Chelsea Bridge …. lit gantries, very bright for all those who pass over or under …. fit for purpose. Thank you.

3. Albert Bridge … the most graceful of all our London Road bridges … a joy to behold (see above) … well-preserved, well-lit, well-managed, well-maintained … a real asset for us all. And has a fine pub named after it.

4. Battersea Bridge … not quite as graceful as its near near neighbour … but it’s pleasantly lit on its roadway with many ‘chandelier’ lights … most practical.

5. The railway bridge from Clapham J to various points north has the official nomenclature of the Cremorne Bridge … it quite rightly carries maritime lights … but nothing else. (Just waiting for a pedestrian/bike path to be added to its side … over to you Sadiq and TFL!!)

6. And now Wandsworth Bridge ... our youngest Bridge … a mere 84 years old … painted light-blue in order to blend in with Old Father Thames (and thus deceive Luftwaffe bombers … not too difficult and thankfully a successful ploy) … it used to be lit on its roadway and have uplighting from its sides … as well as its statutory maritime lamps … but for the last 3.5 years it’s been very dark … and that’s what is both displeasing and dispiriting.

As well as most mysterious.

(Do the KKK now have a foothold chez nous?!!)

… but let’s hope that as we’ve been in touch with TfL things might start to change … (who knows!)

One thought on “THE WANDSWORTH VOICE”