WE LET THE PEOPLE PLAY ….. ESPECIALLY IN BATTERSEA PARK  …. And stroll and run and walk and talk to meerkats and row across a lake …

Let our open, our green and our publicly-owned areas always remain accessible …. for ever and for every day ….  so we pray that our dear, much-valued Battersea Park will never be subjected again to naïve, crass, unprincipled, inappropriate and certain-to-fail commercial ventures …

So farewell then … indeed  ‘Adios, Formula E’ … and we are more than pleased to remind our readers that it won’t be ‘¡Hasta la vista, Señor Agag!’

WE LET THE PEOPLE SCREAM ….

And at the moment it’s probably ‘Help! Help!’ here on the riverside, just beyond our much-loved Wandsworth Bridge and Brady’s fish emporium towards Putney on Nickol’s Walk … when not only has their belovèd one tumbled into the Thames, but also they’ve suddenly realised that the trusty wooden life-belt that they imagined would be there is not actually there.

As our many followers can now see below for themselves …

But fear not …. once they’ve recovered their aplomb or their paramour or from their tragedy – or a combination of these – then they can always report the life-belt to be missing by calling Wandsworth Borough Council on 081 871 6900.
So that’s alright then.

THE WANDSWORTH VOICE has been campaigning for the last couple of years about the parlous state of Wandsworth Bridge. And the local authority’s total lack of action in terms of repairing and refurbishing it.  Both in terms of its basic fabric and its almost total lack of lighting. 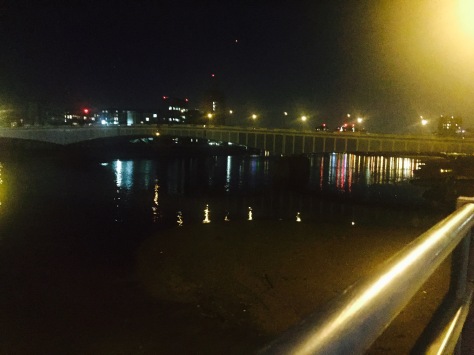 We are not alone in asking our council to do something – and quickly.

Accordingly, we are very happy to bring to our numerous readers’ attention a new petition, started by the residents of Battersea Reach.

TO SIGN THE PETITION GO TO:
https://democracy.wandsworth.gov.uk/mgEPetitionDisplay.aspx?id=89
And here’s what they write about the bridge:

Wandsworth Bridge was completed in 1940, at the height of the Blitz. It was painted in shades of blue as camouflage against air raids, which it has retained ever since. It carries over 50,000 vehicles a day. It marks the boundary at which the speed limit for river traffic travelling upriver is reduced from 12 knots to 8 knots. It is considered the ugly duckling of the London bridges, with a “severely simple” design that “has a somewhat uitilitarian appearance with no significant architectural merit.”

Local residents disagree. In their eyes, it has history and character and adds to the riverscape, especially in the hours of darkness when it is flood-lit – or, at least it was until about two years ago when it fell into total darkness after barges damaged its electric cabling.

The Wandsworth Council says it might get around to replacing the flood lighting in two years time. Until then, the bridge will have to remain shrouded in ominous darkness and maintain an air of despondency for all.

It is unfortunate that the planning consents (Wandsworth application 2005/3442 and Fulham & Hammersmith appeal APP/H5390/A/07/2033961) lapsed. These were for internally illuminated glass cones rising to 10 metres from the plinths on each end of the bridge which would change colour to correspond with the height of the tide. The consents recognised that the lights would be a feature in the regeneration of the riverside sites.

Why should it be left in the dark? Why is the Wandsworth Council not a participant in this project?